Influencers have always been privy to online harassment, but many say that they’ve been receiving more hateful, violent messages than usual over the past few months while people stay home to stop the spread of the coronavirus. “The harassment has gotten worse, 100%, since lockdowns began,” Erim Kaur, a lifestyle […]

Influencers have always been privy to online harassment, but many say that they’ve been receiving more hateful, violent messages than usual over the past few months while people stay home to stop the spread of the coronavirus.

“The harassment has gotten worse, 100%, since lockdowns began,” Erim Kaur, a lifestyle and beauty influencer, told NBC News. “People call me ugly, fat, fake. They say all sorts of horrible things about me and my family and threaten us and you feel powerlessness against it, because they keep making new accounts.”

Kaur said she and three other U.K.-based influencers made a specific group chat to provide support to one another against the influx of insults and harassment they’d started receiving when stay-at-home orders were first established. She also hired a lawyer to help her track threats last month.

Margaret Hemenway, a YouTuber, posted a video titled “Ways to Stop Bullying/Online Harassment (My Story)” last month, saying she has “dealt with a severe case of bullying, more so this past month.”

“I know I’m not the only person who’s experienced bullying, whether that’s in-person or online and I know it’s really easy to do things online because people are available on so many different platforms,” said Hemenway in the video. “Even things like Spotify, Venmo, all the kinds of stuff that the person can contact you on.”

Her video resonated with many who’ve also experienced increased levels of abuse during the stay-at-home orders.

“Many trolls are ramping up the abuse because of lockdown. They love the fact we have nowhere to go or nobody to talk to outside of social media because of the rules,” commented one user. “What better ways to target somebody’s mental health when they’re in social isolation with their own thoughts boxed in a house using technology as our main way to communicate right now.”

A series of tweets from Gabbie Hanna, an actor, musician and content creator with more than 6 million subscribers, also illustrated how social media can facilitate cyberstalking and leave users fearful for their lives during the pandemic.

Let our news meet your inbox. The news and stories that matters, delivered weekday mornings.

“The worst part of having a stalker is the paranoia,” Hanna tweeted earlier this month. “It makes it hard to engage with fans because you never know if it’s the person that hurt you behind the keyboard.”

Hanna added that she had tried to block the stalker, to no avail, as they kept reemerging, which is why she opted to address them directly in a public plea.

“This is me pleading with you, knowing you’re reading this. please, PLEASE leave me alone. leave my friends, family, and fans alone,” Hanna wrote. “I don’t know what you want from me, i don’t know what you’re looking for or waiting for. PLEASE let me live in peace.”

While Hanna did not disclose any additional details about the nature of the stalking, she has been vocal about dealing with stalkers and trolls in past YouTube videos. In 2015, she posted a video about how someone she didn’t know pretended to be one of her friends via text and tried to convince her to answer invasive questions and post intimate images on Vine, the short video platform where Hanna began her career.

Neither Hanna nor YouTube responded to NBC News’ requests for comment, but Andrew King-Ries, a law professor at the University of Montana and chair of the American Bar Association’s Commission on Domestic and Sexual Violence, said that he’s not “surprised that that sheltering in place has exacerbated online harassment as it has generally exacerbated the dynamics of domestic violence.”

Reports of domestic violence, including stalking, have surged during lockdowns. Paladin, a U.K.-based advocacy organization that runs a stalking helpline, reported an uptick in cyberstalking incidents involving social media in the first four weeks of the lockdown and May 6, a Georgia man was arrested on multiple counts of violating an order of protection and one count of cyberstalking, showing the continuous nature of such attacks.

“My fear is that as we move more of our lives online, the devices that increase our connectivity will also create an increased opportunity for stalkers,” King-Ries said. “And when a stalker or harasser can reach you online, they take away your safe space and your ability to get out, which is a horrifying aspect.”

According to the Center for Disease Control, approximately 1 in 6 women and 1 in 17 men have experienced stalking at some point in their lifetime and cyberstalking, including repeatedly receiving unwanted telephone calls or text messages, is the most commonly experienced stalking tactic for both female and male victims.

There have been several public cases involving YouTubers and other influencers who’ve been stalked in recent years, including that of Christina Grimmie, a singer who gained a following posting song covers to the platform and was killed by an obsessive fan after a performance in 2016. And in 2017, a 30-year-old man was arrested after harassing YouTuber James Neese, then 18 years old, and showing up at his house uninvited.

While YouTube prohibits “content that threatens individuals,” the platform advises users to report threats directly to a local law enforcement agency, as per its “Harassment and cyberbullying policy.”

But King-Ries say getting help is more difficult during the pandemic as courts’ physically operations close and migrate online and that the coronavirus has also made enforcing protective orders more challenging.

This is why influencers like Kaur are calling on platforms to enact more sophisticated way of tracking and banning repeat harassers as blocking them doesn’t guarantee they won’t reemerge with a new profile.

“A person isn’t allowed to go to Walmart and scream at an employee. If they did that, they would be banned from the store,” Kaur said. “So when someone threatens or harasses another person on social media, they should be held to the same standards.”

If you or someone you know is experiencing stalking or intimate partner violence, call the National Domestic Violence Hotline at 1-800-799-7233 or visit https://www.thehotline.org/ for additional resources.

Superdrug removes all plastic from its tampon applicators

Fri May 15 , 2020
Superdrug has removed all plastic from its own-brand tampons and launched a new range of organic menstrual products. It is the first health and beauty retailer to make the move in the UK, following in the footsteps of supermarkets like Sainsbury’s and Aldi in its decision to stop producing plastic […] 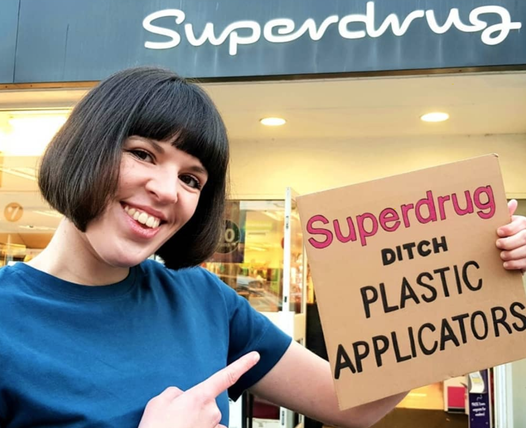